Navigate through the sections of this page using the Presenters menu to the left (desktop) or by clicking the submenu link at the top of this page (mobile).

Holy Trinity is a Jesuit Catholic parish that welcomes all to accompany one another in Christ, celebrate God’s love, and transform lives.  Holy Trinity is recognized for its excellence in worship and the arts, and committed to fostering care for creation through its social justice ministries. 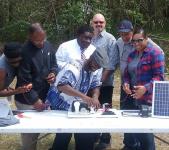 Kingdom Living Temple is a Christian church that is engaged in ecumenical and interfaith work.  The congregation works with partner organizations on issues of environmental justice, social justice, earth justice, economic equity, and community development.

The pastor, Rev. Leo Woodberry, has long worked to address issues of environmental racism and climate justice, first working with the African American Environmental Justice Action Network in the 1990s to organize community members around mercury contamination in fish and waterways from pollution from coal-burning power plants. Rev. Woodberry has served on the Steering Committee of the Peoples Climate Movement and is nationally recognized as an environmental justice leader in the black church community.

The United Church of Santa Fe strives to “Love God, Love Neighbor, Love Creation.”  The congregation’s Earth-honoring faith includes developing a worship life and spirituality that reflects our home in the desert and our respect for all of creation in all its diversity; modeling institutional practices that sustain and restore resources; and promoting justice for humanity and for the rest of creation through education and outreach to the wider community and through support of governmental laws and policies that insure economic and ecological security.

Rev. Talitha Arnold, senior minister since 1987, is a native of Arizona and a graduate of Yale Divinity School.  Steinway Artist Jacquelyn Helin has been United’s Pianist and Director of Music Ministries since 2004.  Larry Rasmussen, an environmental ethicist who is also one of the speakers at this year’s Congregations Project conference, is a member of the congregation.  Their presentation will explore worship, music, and the arts as a dimension of this congregation’s life and witness in their desert setting.

Dorothy C. Bass is a practical theologian and church historian.  During twenty-five years as director of the Valparaiso Project on the Education and Formation of People in Faith, a Lilly Endowment project on how greater attention to practices might contribute to the renewal of Christian congregations, theology, and life, she wrote, edited, or coedited more than a dozen books, including Practicing Our Faith, Receiving the Day, and Leading Lives That Matter.  She is now Senior Fellow in the Lilly Fellows Program at Valparaiso University.

Martin Jean is Professor of Organ and Director of the Institute of Sacred Music. He has performed widely throughout the United States and Europe and is known for his broad repertorial interests. He was awarded first place at the international Grand Prix de Chartres in 1986, and in 1992 at the National Young Artists’ Competition in Organ Performance.

John Ferguson is an acclaimed organist, choral conductor, composer and teacher, who retired as Professor Emeritus of Organ and Church Music at St. Olaf College in 2012. Dr. Ferguson has published more than 100 compositions and arrangements, including many based upon existing hymn texts and tunes as well as newly commissioned texts. He has designed and presented hymn festivals for national and regional conventions of the American Guild of Organists and American Choral Directors Association (ACDA).

Teresa Berger holds doctorates in both liturgical studies and constructive theology. She serves as Professor of Liturgical Studies and Thomas E. Golden Professor of Catholic Theology at Yale Divinity School and the Institute of Sacred Music.  Her most recent book is @Worship: Liturgical Practices in Digital Worlds (Routledge, 2017). An active Roman Catholic, Professor Berger has produced (with MysticWaters Media) a CD-ROM, Ocean Psalms: Meditations, Stories, Prayers, Songs and Blessings from the Sea (2008).

Jill Y. Crainshaw is Blackburn Professor of Worship and Liturgical Theology at Wake Forest School of Divinity and an ordained teaching elder in the Presbyterian Church (USA). Her writing and teaching emphasize how Christian worship and leadership arise from and return to human experience. Her newest book, When I in Awesome Wonder: Liturgy Distilled from Everyday Life (The Liturgical Press, 2017), explores how worship’s sacramental elements such as bread, wine, and water are connected to local fields and farmers, waters and artisans.

Michelle Lewis is the pastor of New Rochelle United Methodist Church and is passionate about the intersection of religion and the environment. She is an award winning filmmaker and hosts a radio show that examines connecting our spirituality with daily life. Michelle is the first woman of color to hold joint Master’s degrees in Religion and the Environment from Yale. You can learn more about Michelle’s work at MichelleEstelleLewis.com

Larry Rasmussen is considered one of the world’s foremost Christian environmental ethicists. He has mentored a generation of Christians in eco-theology and “green religion.” He is Reinhold Niebuhr Professor of Social Ethics emeritus at Union Theological Seminary and has published more than a dozen books, including the award-winning volumes Earth Community, Earth Ethics and Earth-Honoring Faith: Religious Ethics in a New Key. Rasmussen served as co-moderator of the Justice, Peace, Creation unit of the World Council of Churches in the 1990s.

Don Saliers is William R. Cannon Distinguished Professor Emeritus of Theology and Worship at Emory University, where he also directed the master of sacred music program. An accomplished musician, theologian, and scholar of liturgics, Professor Saliers is the author of 15 books on the relationship between theology and worship practices, as well as more than 150 articles, essays, book chapters, and book reviews. He co-authored A Song to Sing, a Life to Live with his daughter Emily Saliers, a member of the Indigo Girls.

Worship, Music, and the Arts

Emilie Casey is the Marquand Liturgical Minister and Chapel Communications Manager at Yale Divinity School. She came to YDS and ISM as a student in 2013, and after graduating with an MDiv (’16) and STM (’17), Emilie started her work in Marquand Chapel. Emilie is passionate about liturgy and worship, homiletics, and collaborative worship planning. Prior to her studies at Yale, Emilie studied music education and clarinet at the University of Tennessee, Knoxville. Emilie is a member of the ELCA.

i Dawn is Associate Dean of Marquand Chapel and Associate Professor (Adjunct) of Theology and Literature at Yale Divinity School and the Institute of Sacred Music. After a first career in music, she was a teaching fellow in systematic theology at the University of Cambridge, where she also served as college chaplain. Professor Dawn is an ordained priest in the Church of England and a senior member of King’s College and Robinson College in the University of Cambridge.

Nathaniel Gumbs was recently appointed as Director of Chapel Music at Yale University, where he works with students, faculty, and guests to coordinate music for the University Church in Battell Chapel and at Yale Divinity School in both Marquand Chapel and at Berkeley Divinity School. He is a frequent guest musician at Abyssinian Baptist Church in Harlem, and is organist and clinician for the Hampton University Ministers’ Conference. In 2017 he was named in the “Top 20 Under 30” by Diapason Magazine. Nat expects to complete the Doctor of Musical Arts degree at Eastman School of Music in 2018.

Ted Lyddon Hatten is an artist and a theologian who describes his work as theopoetic and multidisciplinary. As a visual artist, he works with a variety of media, including myrrh, liquefaction, coffee grounds, beeswax (encaustic), dry pigment, egg tempera, grain, gunpowder, glass, sand, and salt. He uses photography as a tool to explore the world and to express his work–particularly installations, dry painting, and other pieces that are inherently ephemeral. Ted is currently the Director of the Wesley Foundation and adjunct professor at drake University. His studio is located in Indianola, Iowa.

Rita Ferrone is currently the editor of The Yale ISM Review, and a contributing writer at Commonweal magazine. She is a liturgist in the Roman Catholic tradition, and has worked for many years in parishes and diocesan offices, particularly in the ministries of Christian initiation. She is also widely known as an author and conference speaker. A graduate of Yale Divinity School, Rita received their alumni achievement award in congregational ministry in 2007. She lives in Mount Vernon, NY.

Estrella Sainburg is the Circle Organizer for GreenFaith. As Circle Organizer, Estrella is working to support interfaith local community organizing for the environment in New Jersey and around the world.  As a native Spanish speaker, she especially hopes to empower Latino communities in the United States to advocate and ensure a healthy living environment and harmonious relationship with the natural environment, as well as see more Latinos speaking about environmental injustices.

Betty Whitted Holley is Associate Professor at Payne Theological Seminary, where she teaches ecological theology and Christian Education and directs the Master of Divinity Degree Program.  She also serves as a member of the Broader Social Impact Committee (BSIC), for the Smithsonian Institute of Natural History, Washington, DC, and as Presiding Elder of the Columbus-Springfield-Xenia District of the Ohio Conference (Third Episcopal District) of the African Methodist Episcopal Church, superintending thirty churches. She holds a Ph.D. in Environmental Ethics and African American Religious Studies.

Anne Rowthorn, Ph.D. has written twelve books, among them three collections of ecological writings:  Earth and All the Stars, Feast of the Universe and Song of the Universe. Most recently she compiled and edited The Wisdom of John Muir: 100+ Selections from the Letters, Journals, and Essays of the Great Naturalist (Wilderness Press).

Jeffery Rowthorn was one of three founding faculty members of the Institute of Sacred Music and first Chapel Minister of Yale Divinity School. He went on to be elected Suffragan Bishop of The Episcopal Diocese of Connecticut and then served as Bishop of the Convocation of Episcopal Churches in Europe.  His hymns have been widely published and he has compiled three hymnals, most recently (with Russell Schulz-Widmar) Sing of the World Made New:  Hymns of Justice, Peace, and Christian Responsibility.

Anne and Jeffery’s joint compilation, God’s Good Earth, contains 52 liturgies of praise and prayer for many aspects of creation and will be published by Liturgical Press in the fall of 2018.